Title: Basement, 1999
Author: baudown
Pairing: Spike/Xander
Disclaimer: Love them, don't own or profit from them
Feedback: Please!
Note:  I'm posting this as part of my "posting every day in January" challenge to myself.  It's actually part of something larger that I've never finished (I discussed this piece a few days ago).  It was supposed to be a story showing scenes of the boys over time, and this was meant to be the first part.  I think it can stand on it's own as a pre-slash ficlet, so I'm not calling it a WIP.  So there. 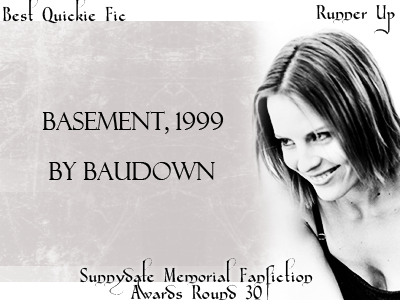 "What the fuck!" Xander shouted.  Or would have, if Spike hadn't seized his mouth in a firm lip-lock.  What came out was more like, "Mphnguk!"  Then his brain drifted briefly to its happy place -- cartoons, summer, triple-fudge ice cream -- before sanity crashed back in.  He flat-palmed Spike's chest and shoved, hard.

"What are you doing?" he gasped.

"What am I doing?" Spike asked.  "It's what you've been doing.  What's a man to think?  On your knees, all the time, at my feet!  And last night, squirming all over my lap!  Practically begging for it, you are."

"Jesus, Spike," Xander said, leaving stunned behind and moving on to righteous indignation.  "Delusional, much?  I was just reaching over you to get the remote!  And it isn't kneeling, it's bending.  Which I have to do in order to tie you up.  Which I have to do because you're an evil, untrustworthy monster!"

"Please," Spike sniffed dismissively.  "Vampire, pet.  I can smell it.  Lust coming off you in waves."

"Oh, right," Spike scoffed; but Xander detected a faint note of doubt beneath the bluster.  Spike backed up a step, and then another.  Xander felt his heart rate ebbing toward normal.

"So," Xander said, the words coming out too loud and overly hearty.  "Let's just chalk this up to insane vampire logic, shall we?"

Spike shrugged.  "Whatever you say, Harris," he replied, affecting his usual air of casual boredom.  "Your loss, ain't it."

Xander responded with a sardonic snort.  "I'll just have to learn to live with the pain," he said, adding an emphatic "not!" for good measure.  It was pretty weak, as taunting went, but he was distracted by his dick, which had turned suddenly, traitorously hard, and was pressing with annoying persistence against his zipper.

Spike opened his mouth to snap back, but the intended retort was abandoned as he caught sight of Xander's crotch.  His gaze lingered there, carefully examining the humiliating evidence, before traveling upward.  "Yeah, looks right painful," he agreed, smile smug, eyes bright.  He folded to the couch, arranging himself for maximum impact: legs spread wide, fingers curled against his thighs, hips lifting lewdly as he shifted.  Xander felt his cheeks get hot, and the back of his neck; and he wasn't looking, he was so not looking, there was no way in hell he was looking.

"I'm...I'm going to Anya's," he managed, crossing the room to make a sorely overdue exit. He fumbled, cursing softly, because doorknobs -- not as easy as you might think.

"You do that, pet," Spike called after him, and if it weren't totally out of character for a murderous fiend, Xander would have sworn it was giggling he heard as he left.

Xander hadn't lied.  He really did have sex on the brain most of the time -- though to be honest, he was far less prone to random hard-ons than he'd once been.  Still, it didn't take much to get him going.  Lesser men might have wilted at Anya's forthright demands for "clitoral stimulation," but not him, no sir.  Frankly, anything that even smacked of sex did the trick, and when it came to that, Spike packed more of a knock-out punch.  So he was fairly certain that one errant boner didn't mean he was somehow lusting after Spike -- no need to panic here, people.  No, the real problem was that Mr. Chip had gotten creative about re-directing his muzzled, evil impulses, and Xander had just made himself a billboard-sized target.

So when he returned to the basement, clutching Anya to him like a shield, he was surprised to find Spike packing up to move.  Packing Xander's things, sure, but still -- leaving, at last.  And it had to have been relief he felt -- of course, it was relief -- but if he was a little angry, too, it was only because Spike was trying to steal his radio, and Anya was giving away his lamp; and it had exactly nothing to do with regret, or disappointment, or the memory of Spike's mouth.

Spike sauntered out, pausing only to ash on the carpet, and hurl one last insult over his shoulder.

"You're welcome, jackass!" Xander yelled, aiming what he hoped was scathing sarcasm at Spike's departing back.  "You could've at least shut the damn door!"

He stood there for a moment, peering into the dark.  The crickets were making their crickety sounds, and the sky was crowded with stars.  If he looked very hard, he could just make out Spike's shape in the distance.

Xander began to pull the door closed.  But as he did, a breeze picked up, bringing a gust of air into the stuffy room.

He decided he'd leave it open, for a while.